skip to main | skip to sidebar

Charts by a 'Ghost' 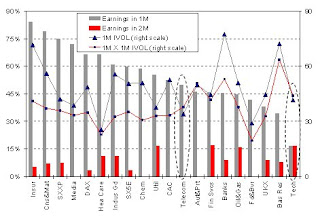 Chart of the Day: Volatilities and earnings
¨ Today’s chart looks at the 1 month implied volatility and 1 month forward volatility 1 month (1M X 1M forward implied) hence and compares it with the percentage of companies that will be reporting earnings in the first and second months from today. The forward volatility is interpolated from one month and two month implied volatilities.
¨ As the chart shows number of companies reporting earnings in the first month exceeds that of the second month which has led to 1 month IVOL to trade at a higher level than 1M X 1M forward IVOL in most of the cases. The 1M X 1M forward volatilities of Telecom and Technology are currently exceeding the spot one month implied volatilities, though the latter’s level can be attributed to the same number of companies reporting earnings in the second month as in the first month. The largest differences between spot 1M IVOL and 1M X 1M forward IVOL are seen in Insurance, Banks, Industrial Goods and Chemicals in declining order. Larger the difference larger is the expectation of decline in volatility one month hence by the market. 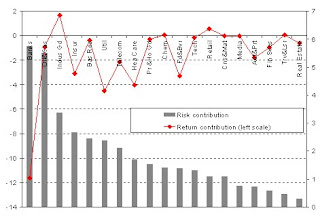 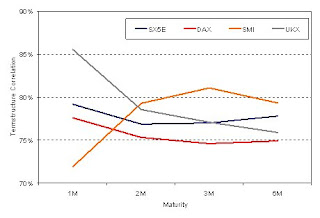 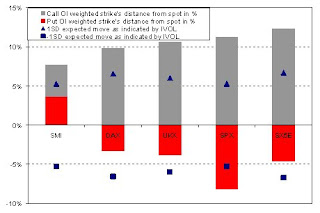 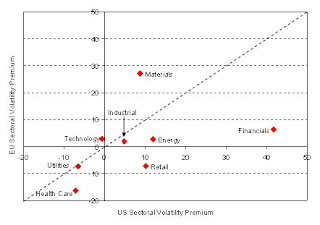 Chart of the Day: Sectoral Volatility Premium – EU vs. US
¨ Today’s chart is a scatter plot of 3M implied volatility premium of sectoral indices in EU and US as against the broader market indices, SXXP and SPX, respectively i.e the differences between implied volatilities of sectoral indices and respective broader indices. In a globalized world the volatility premium across regions if not at par should be trading in a close range. Especially, US and EU being the two most open economies in the world with strong trade relationship should have volatility premiums at par except for anomalies caused due to some region specific issues related to sectors.
¨ Financials sector in EU is trading at lesser premium of 6.4 vols compared to 41.7 vols of the US which reflects the losses accumulated by American banks to the tune of USD 810 bn compared to USD 349bn by European banks; moreover European banks have raised capital in excess of the losses while US banks are still short of USD 239bn. Surprisingly though Materials sector in EU trading is at 27 vols premium as against 8.7 vols in US hence shorting volatility of EU material sector might pay off. Energy and Healthcare are other two sectors that show a dichotomy between volatility premiums in US and EU. EU’s healthcare is trading at a deep discount of 16.4 vols as against US’s 7.1 vols discount. Energy in US is trading at a premium of 12 vols compared to a paltry 2.6 vols in Europe. 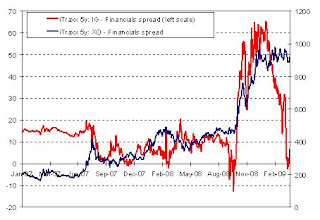 Chart of the Day: Credit spreads – IG, XO vs. Financials
¨ Today’s chart looks at the evolution of the spread between iTraxx 5Y IG CDS and iTraxx 5Y Financials and also spread between iTraxx 5Y Crossover (XO) and iTraxx 5Y Financials. These two spreads actually look at the margins a financial company might make by lending to investment grade and lower rated companies
¨ Generally, Financial companies as an intermediary of transactions in an economy borrow at lower credit spread and lend at higher spread. Prior to subprime crisis financial companies made a margin of 15 bps and 200 bps by lending to IG and XO companies, respectively. But recently the spread between IG and Finacials have shrunk to zero levels while the margin for XO is a healthy 800+ bps, there by making lending to IG companies unprofitable and during recession lending to XO gets riskier despite tempting spread margins. Hence to spur lending by banks the balance sheet of banks and financial institutions have to be recapitalized 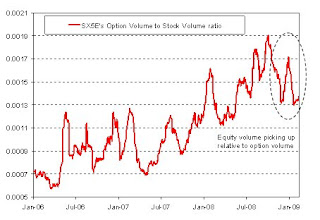 Chart of the Day: SX5E’s option to stock volume ratio
¨ Today’s chart looks at the evolution of the ratio of option volumes to equity volume ratio of SX5E index since January 2006. The data series were smoothened by taking 20 day averages. We have seen that as the risk averseness among investors rose the option volume too gained momentum. SX5E option volume which was around half a million rose to 2.5 million per day as volatility surged. As the volatility eased hedged positions were unwound and hence the option volume declined
¨ Since the start of this year the volume gained by equity was higher than the gain seen by the options, equity volume rose by 49% compared to option’s 33%. And as the volatility settles within a range the volume might decline further and there by the pin risk will diminish in future expiries 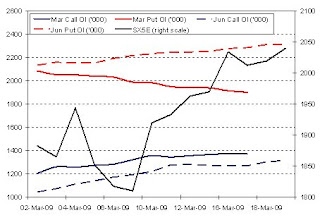 Chart of the Day: SX5E Open Interest (OI) rollovers
¨ Today’s chart looks at the evolutions of open interest (OI) of both call and put options of March and June expiries since March 2nd 2009. The open interest is the sum of the open positions of strikes on SX5E ranging from 1500 to 2500 at an interval of 100
¨ The chart shows that as the market rallied from 1,882 to 2,050 the put open interests got unwound while call open positions were being strengthened as indicated by converging of March expiry put and call open positions. Currently conflicting signals are emanating from the OI evolutions, while the put OIs of June expiry are consistently exceeding that of March expiry, the March call OIs exceeded that of June consistently. This indicates that the rally might just end up becoming the third bear rally since October 2008. Though the positive signal is that the June call OI has risen by 270,000 contracts since the start of March compared to 175,000 increase in June put OI 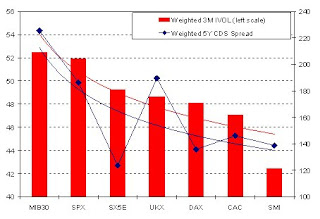 Chart of the Day: Weighted implied vs. Weighted CDS
¨ Today’s chart looks at the weighted 3M implied volatilities and weighted 5y CDS spreads of leading indices. Though there are options available on indices like SX5E, DAX and others, non availability of similar kind of credit indices with similar underlying make comparison of implied of the index and credit index unfair. Hence to over come the issues of different underlying and correlation, plain market cap weighted implied volatilities and CDS spreads are used to compare the pricing between option and credit markets
¨ The chart shows despite SX5E index’s low weighted CDS spread of 123.7bps the 3m implied volatility is almost at 50 vols, which indicates that option market is pricing is more risk premium than credit market. Similar kind of divergence is also seen in UKX and SPX. While weighted CDS spreads of SPX and UKX are 186bps and 189bps, respectively, SPX’s implied is trading at a premium of 4 vols over UKX’s 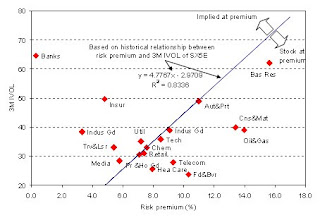 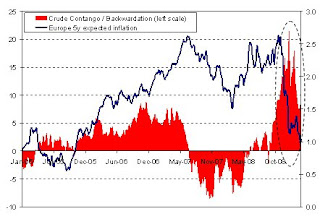 Posted by Copula at 1:01 AM No comments:

Copula
Am a jack of all trade but master of none – a typical MBA grad. My posts are just doodles and some of them are atrociously nonsensical for instance the post on crude, “Crude’s supposedly demand curves”. (BTW I have posted this chart as I felt it looks good)